Retirement will not stop Michelson from serving the city she loves 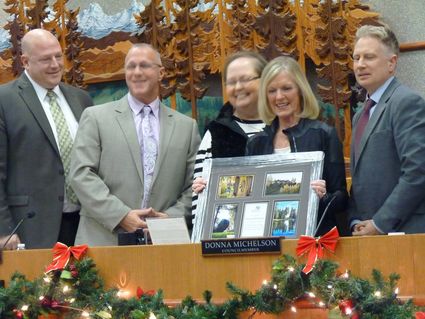 Retiring Councilmember Donna Michelson (second from left) was surrounded by members of the council last Tuesday when she accepted a framed collage of photos from her 18-plus years on the Mill Creek City Council. Pictured with Donna are (l-r) are Mayor Pro Tem Brian Holtzclaw, Mayor Pam Pruitt, Councilmember Vince Cavaleri and Councilmember Mark Bond.

The phrase “creature of habit” may be a cliché, but if you were to look up that idiom in the dictionary, you might very well find Donna Michelson’s picture.

Six days a week, like clockwork, Michelson heads out her front door around 8 a.m. for her morning run, logging some 10 or 11 miles. Sometimes it takes her three hours or more.

Is that because she’s a really slow runner? No. Her morning runs are part exercise, of course, but they often include frequent stops for neighborly chats and, notably, serve as a sort of traveling “meet and greet” with constituents.

There was the housewife who saw the need for a crosswalk sign in her neighborhood, a group of seniors who asked for a bench to rest on halfway between their retirement community and the library, and the sharp-eyed resident who spotted a suspicious character loitering about.

Those and many other conversations provided Michelson opportunities to serve the community, just like she has since March of 1999.

“I get caught up,” she said. “I love being a goodwill ambassador for our city.”

But Michelson, a Mill Creek city councilmember for 18 years, is about to break that longtime habit. Next week will be her final meeting on the council following her decision not to seek another term.

Michelson, 68, moved to Mill Creek with her husband Bruce and their son and daughter in 1978. She worked 38 years as an administrative assistant at Everett Steel where she also met Bruce, who is still working there at 54 years and counting.

She also began tipping her toe into community activism, working with another resident to launch an after-school teen center called the Malt Shop on Bothell-Everett Highway.

“There were too many kids who weren’t into sports or other after-school activities and had no place to go,” Michelson said. “There was a missing link.

“The take-away was that two people could make a difference in the community.”

The experience also piqued her interest in serving on the Mill Creek City Council. When a vacancy opened in March of 1999, Michelson applied, and went through the interview process with 12 other applicants. Much to her surprise, she was appointed to fulfill the unexpired term of John Lovick.

Michelson dove right in. She will depart with a long list of achievements to her credit.

She started annual paper shredding events after attending a workshop on the importance of protecting your private information.

“It used to be you’d toss your mail with some coffee grounds and eggshells, and call it good,” Michelson said. But after learning about increasing problems with identity theft, she decided to promote a safer option. The hugely successful event ended after several years when a change in ownership at the shredding company made costs prohibitive.

On her runs, Michelson also comes across stray dogs on a regular basis. Learning that police officers spend up to two hours transporting lost pets to the Everett animal shelter  “That’s a lot of time off their city beat,” she said.  Michelson contacted a company that manufactures microchips for pet implants, along with a local veterinarian, and bartered an arrangement to microchip 150 pets, at no cost to the city.

Later she also initiated a hazardous waste roundup, helping residents get rid of motor oil, pesticides and other dangerous household items. She contacted Snohomish County officials to bring a truck to the city, and enlisted a couple of friends to help receive items as residents drove up to the collection site.

It also was Michelson who got the ball rolling to build a veteran’s monument next to the library, after community activist Chuck Wright repeatedly lobbied the council for it.

Traveling around the country, Wright, a veteran himself, noticed that many towns and cities had monuments honoring that community’s veterans. He thought Mill Creek should have one, too.

“I went to the council on three occasions, and on the third time Donna was so moved she made a motion to have the city get involved with the monument,” Wright said.

Michelson said Wright never fails to give her credit, but she emphasized that the veterans' monument as well as other projects she’s been a part of were always team efforts, from citizen volunteers to city staff.

Michelson leaves with numerous other accomplishments to her credit, including helping to make Town Center a reality, the Sports Park, art walks and Great Garden awards.

Longtime Councilmember Mike Todd, a regular ally on the council, said Michelson has provided valuable perspective along with tireless commitment over the years.

“Donna has been more committed than anybody I know,” Todd said. “That commitment to the community is what distinguishes her.

“And because of her long, deep roots, she has a really good perspective on issues. She always asks, ‘What does the community want?’ It’s never what does Donna want. And that’s the right attitude.”

Todd said her conversations with friends and constituents while on her daily runs, on the phone and around town have made her the face of Mill Creek.

“She’s been old school social media before there was social media,” he said. “Sort of a ‘Face-to-Face Book.’” 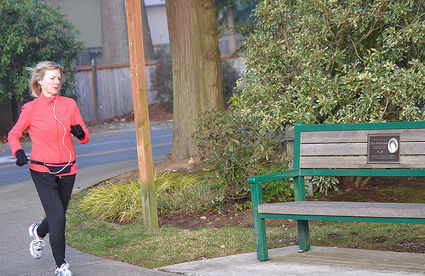 Mill Creek Councilmember Donna Michelson runs past a memorial bench at Heron Park that she helped get installed. Part of Michelsons daily runs includes frequent stops to chat with neighbors. Its a habit she plans to keep, even though shes retiring from the council. I love being a goodwill ambassador, she said.

Todd said Michelson will be missed. “I’m gonna miss her a lot,” he said. “It’s a big loss. But I think she’s going to remain engaged.”

Michelson guarantees it. She’ll probably show up at future council meetings to speak from the other side of the dais, and she’ll continue to engage residents and friends on her daily runs.

“I’ll always be a goodwill ambassador,” she said.

It’s a habit with her.