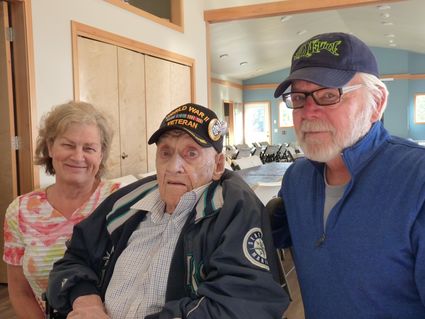 World War II veteran Preston Scheid was flanked by his daughter and son-in-law, Jon and Midge Talman as he recalled stories from his experiences as a radioman at an RAF base near London. The 99-year-old former staff sergeant in the Army Air Corps will ride in the first convertible to make its way down Main Street in the annual Mill Creek Veterans Day Parade on Nov. 11.

He can recall bits and pieces of what he did in London as a radioman with the Army Air Corps. But he is frustrated that he cannot recall details of the stories he has shared with his family over the years about how he helped guide bombers across the English Channel after dangerous flights over Germany.

Scheid will be an honored guest during the annual Veteran’s Day Parade in Mill Creek next weekend. The wheel-chair bound veteran is scheduled to ride in the first convertible that will make its way down Main Street next Saturday morning, Nov. 11.

If all goes according to plan, the procession will stop to allow the former commander of American Legion Post 127 to be guided to his seat in the viewing stand so he can watch the bands and other dignitaries go by. He has also been invited to participate in the solemn ceremony at the Veteran’s Memorial near the Mill Creek Library immediately after the parade.

The 99-year-old vet will be one of several former servicemen who will be honored during the parade and the schedule of activities in the city. The list of dignitaries riding in the procession includes retired Brigadier General William G. Hathaway, a member of the Mill Creek Rotary and the grand marshal of the 2005 parade.

Commander Rodman D. Burley has agreed to serve as the Grand Marshall of this year’s annual parade down Main Street from Town Center to City Hall. Burley has served as the Executive Officer at the Naval Air Station in Everett since 2015. The procession in Mill Creek will include 41 entries, highlighted by marching bands and color guards representing groups from military personnel to cub scouts.

This year’s parade includes also includes an entry from Silver Firs Elementary and Heatherwood Middle School to draw attention to the month-long Operation Gratitude program being conducted jointly by the two public schools.

The 2017 edition of the Mil Creek Veteran’s Day parade will include two fire trucks from Station 76, several local veteran’s organizations, a 1952 Command truck and a 1952 M34 Eager Beaver, almost a dozen military Jeeps, the matching band from Glacier Peak High School performing with Navy soloist Garrett Stephan and the cheer squad from Jackson High. The procession will also feature the elements of the Seattle Mounted Patrol and the Snohomish County Sheriff’s Posse.

The ceremony at the Veteran’s Memorial after the parade will include recognition for all five branches of the American military as well as individual introductions for veterans who served in each US deployment since World War II. Special acknowledgements will be made to the Gold Star and Blue Star families in attendance.

The program will be hosted by Dan Limberg and Police Chaplain Nick Lewis. Glacier Peak student Curban Epp will play taps during the solemn ceremony. Veterans on the Mill Creek Police Department will be honored separately for their service to the nation and commitment to the community.

The city has also requested a fly-over from aircraft housed at the Flying Heritage Collection near Paine Field and the Naval Air Station on Whidbey Island. Participants in the parade have been asked to gather at 9 a.m. The procession along Main Street is scheduled to begin at 11.

Motivated to honor those who have served, Mill Creek resident Fred Fillbrook joined other veterans and community members to organize the first Veterans Day ceremony in the city in 2008. Fillbrook partnered with the city to establish the first-ever Veterans Day Parade in 2015.

At that time, Arlington and Auburn were the only cities in Washington that held a Veteran’s Day parades.

“To me, it was shameful that those who paid the price were so easily forgotten,” said Fillbrook, who served overseas in the U.S. Army’s 82nd Airborne Division “U.S. military personnel have paid for our freedom, including many with the loss of their lives.”

The parade and Veteran’s Day activities have been coordinated for the city by Brian Davern, the manager of recreation and tourism.