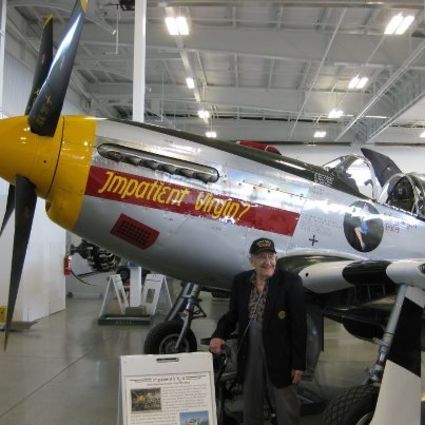 Former Army Air Corps radioman Preston Scheid was reunited with on of the P-51 Mustangs that flew support for American bombers over Europe during World War II at the John Sessions' Historic Flight Museum at Paine Field after it was salvaged from a muddy field in England. The 99-year-old veteran provided the homing beacon for Allied aircraft returning across the English Channel after dangerous missions over hostile territory.

American Preston Scheid had a memorable tour of duty as a radioman with the 361st Fighter Group of the Army Air Corps stationed at Little Walden RAF and Bottisham RAF at the end of WWII.

The 99-year-old has shared stories of his wartime experience with his children, grandchildren and great grandchildren about how he performed his duties from the relative safety of the British airfield. He also spent time in the belly of American B-29 bombers on missions over Germany.

His memory may not be what it once was, but Scheid still sits tall in his wheelchair when he describes how he sat at his ra...