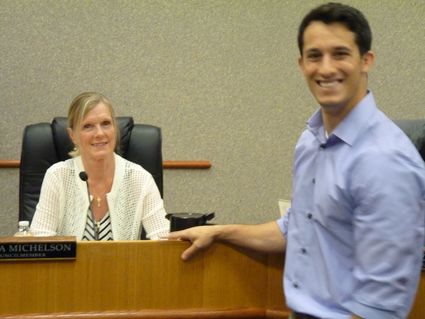 Councilmember Donna Michelson shared some of the wisdom she has gained from her 17 years on the City Council with Jared Mead, who is running unopposed to fill Michelsons seat on the council. Mead, 26, has met with other members of the council as well as individuals on the city staff to gain as much knowledge as he can before assuming office in 2018.

Jared Mead has been preparing for the Mill Creek City Council election next month since he was 8-years-old.

Mead is running unopposed for Position No. 2, a seat that has been held by council stalwart Donna Michelson for more than half of the time Mill Creek has an incorporated as a city. The 26-year-old knew he wanted to run for public office, he just did not think getting elected would be this easy.

Mead had filed to run before Michelson decided to step down to spend more time traveling with her husband. The open door forced him to take a crash course in city government.