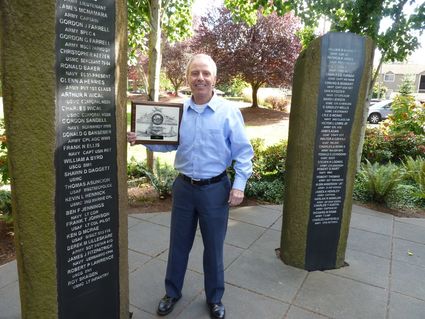 Snohomish County Councilmember Terry Ryan holds up the Friend to the Navy award during a recent visit to the Military Memorial near the Mill Creek Library. The former mayor of Mill Creek responded to critics by showing the plaque he received from Rear Admiral Jim Symonds in 2010 during ceremonies at the Navy base in Everett.

County Councilman Terry Ryan often refers to himself as a Boy Scout because of the clean cut, family image his father told him was an important part of being in public service.

In keeping with the Scout motto, Ryan is prepared to defend himself from accusations brought up against him by his opponent in the November election and some long-time adversaries from Mill Creek.

Ryan’s opponent in the fall runoff for the four-year term to represent District 4 on the county board is Marcus Barton, a self-proclaimed Republican who served for 16 years in the US Army. Barton has questioned the awar...