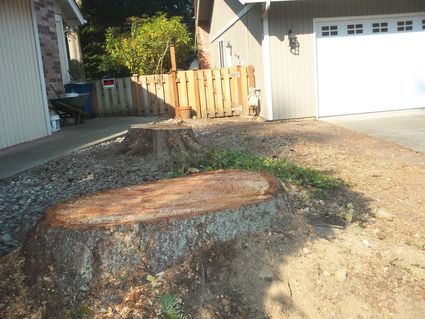 The mature trees that line the streets of the Heatherstone neighborhood are part of the charm that makes the community attractive to potential buyers. But the tall pines and cedars can also be intimidating if they are positioned too close to the home.

That was apparently the case with one of the newest residents of the neighborhood who had eight trees removed last month. The removal was done with approval of the city and according to the guidelines mandated by the community organization. But that has not appeased several of the neighbors who remain upset the majestic trees have been replaced by stumps.

One neighborwho asked not to be identifiedsaid the newest resident of Heatherstone had recently moved from Edmonds and was afraid of the damage the trees could cause to his home in a windstorm. The neighbor said it required two large trucks to remove the fallen trees.

Repeated attempts by The Beacon to contact the homeowner who had the trees removed both in person and by telephone were unsuccessful.

Many of the trees in the neighborhood were there long before Heatherstone was developed more than 35 years ago. Residents who have seen the trees grow over the years have become protective of the sanctity of the community.

“A lot of the trees in the older subdivisions are getting very large,” said one concerned neighbor. “We actually had five trees removed a few years ago because the roots were starting to make our driveway buckle.”

Mill Creek does not prohibit the removal of trees on private property as long it is not in a protected area or designated for preservation, according to Tom Rogers, the city’s director of community and economic development. Rogers said the city had no reason to deny the homeowner’s application to take down the trees around his house.

Rogers explained that city allows homeowners to remove significant trees, at least six inches round at chest height (about three feet), with a permit unless they are on protected parcels or designated for preservation.

Trees can only be removed from protected parcels, Rogers said, if they are diseased or pose a threat to existing structures.

Martine Grube contributed to this story.