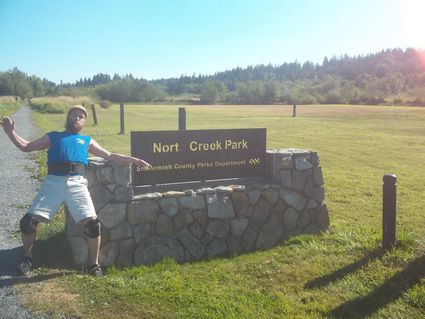 Mill Creek resident Mike the Mover reenacts the tumble he had after he tripped on a pipe protruding from the ground at the head of the North Creek at North Creek Park near his home on 9th Ave.  SE. Mike claims dozens of people stumbled over the pipeincluding mothers pushing strollersbefore the county trimmed the bollard that was intended to hold metal barricades to keep vehicles off the walking path.

Disagreement over the responsibility for a metal pipe protruding from the ground at the head of the North Creek Trail at North Creek Park did not prevent the county from eliminating the potentially dangerous obstacle.

Snohomish County Parks Director Tom Teigen issued a work order to remove the hazard despite questions over responsibility for the bollard that had been filled with gravel.

The pipe, originally installed to hold a metal post to keep vehicles from entering the pathway, is adjacent to a sign welcoming visitors to the former lake bed. The parking lot and road that ends at the trailhead are maintained by the city of Mill Creek.

“The important thing here is eliminating the potential danger to people who use the trail to access the boardwalk,” Teigen told The Beacon. “We can worry about who is responsible at a later date.”

Teigen said the white paint concerned neighbors applied to the metal pipe did not eliminate the hazard.

County crews did not remove the concrete that holds the bollard in place, but did cut the portion of pipe that was above ground level and covered the area with gravel.

Political activist Mike the Mover (his legal name) lives less than a half-mile from the entrance to the park. He said that he called both he city and county regarding the protruding pipe, but claims that the staff members he spoke with told him the hazard was the responsibility of the other government entity.

Mike the Mover said he has avoided injury during the 30 years he has operated his moving company, but hurt his hip and leg when he tripped on the bollard last month and fell backwards into the stone sign at the entrance to North Creek Park.

“There are literally hundreds of people out here every weekend walking their dogs,” he said. “I’ve even seen mothers with babies in strollers who have been hung up by the pipe.”

Challenges on other public walkways in Mill Creek are not always solved as quickly resolved. Complaints to the management company that operates Town Center about handicapped access to The Lodge Sports Grill on Main Street were referred to the owners of the restaurant.

The Lodge does have ramps for handicapped access to the front door of the restaurant. The manager of The Lodge said he accommodates guests in wheelchairs on a daily basis and has never received a complaint.

The woman who filed the grievance claimed the turn from the ramp to the front door of The Lodge is too sharp for individuals in wheelchairs without assistance.