Get ready for rare solar eclipse with classes, glasses 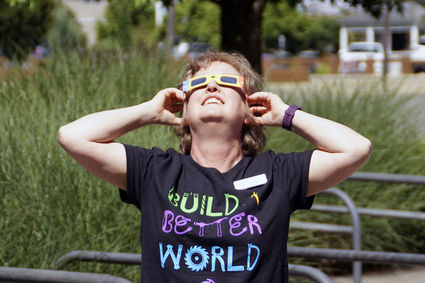 You haven’t really seen the sun until you've looked at it through the eyes of Roger and Linda Kennedy.

The New Mexico-based couple travels the country for NASA, presenting free classes about the science of the sun.

Ahead of a rare total solar eclipse set to occur Monday, Aug. 21, the Kennedys are bringing their telescopes and other equipment to various community libraries within the Sno-Isle Libraries system, including the Mukilteo Library at 2 p.m. on Monday, July 31.

The Kennedys will bring free eclipse glasses, which make it safe to look at the sun, for participants in each class. Attendance is free.

“We set up two telescopes and a spectroscope, and a couple of tables with information about the sun. We talk about the sun, how we use light in science and how the spectrum comes into play.”

Both retired  Roger from teaching science and Linda as a librarian  the Kennedys are members of many astronomy groups, including the Albuquerque Astronomical Society, the New Mexico chapter of the Charlie Bates Solar Astronomy Project, as well as the Timmy Telescope Solar Astronomy Outreach.

“We go around the country now doing solar education events,” Roger Kennedy said by phone from his home. “It just happens that we have an eclipse this year.”

The Kennedys were already sharing their love of the stars when NASA called.

“A couple of years back, the Goddard Flight Center contacted us and said their outreach funding was getting repurposed,” Kennedy said. “They asked if we’d like to partner with them, and you don’t say no when NASA calls.”

Since then, more funding has come from nearby Sandia National Laboratories and other grants to buy additional equipment for classes.

“Most people look through the telescope, see a red ball and say, ‘What’s that?’” Kennedy said. “I tell them that’s hydrogen, then we explain the phenomenon of the sun; most people have never really seen the sun.”

Kennedy said one event in Albuquerque drew a young couple with French accents.

“They looked through the telescope and I started my spiel,” he said.

“They said, ‘We know all about that, but we’ve never seen the sun before.’ It turned out they were from CERN, the particle accelerator in France. Two PhDs in town talking at Sandia about subatomic particles, and there I am talking about a big red ball.”

Doctorate or not, Kennedy said that after looking through the telescopes, a favorite activity during the classes is making bracelets of beads sensitive to ultraviolet light.

“We make the bracelets indoors and the beads don’t change colors,” he said. “Then we go outdoors and light that is invisible to us makes them change.”

“I worked with Linda Kennedy at the library in Albuquerque,” Beatty said. “We signed them up in 2014 and it was just fantastic.

"This year, I got in touch and asked if they were interested again. They said, ‘Oh, sure, how many can we sign up for?’ They are truly incredible people.”

Fun with the sun

Sno-Isle Libraries has created a solar eclipse resource page with information about the coming solar eclipse, the sun and other astronomical tidbits.

At 10:30 a.m. Aug. 21, the Mariner Library will host “Suited for Space,” a program from the Museum of Flight in Seattle. An eclipse viewing session will take place just before the program.