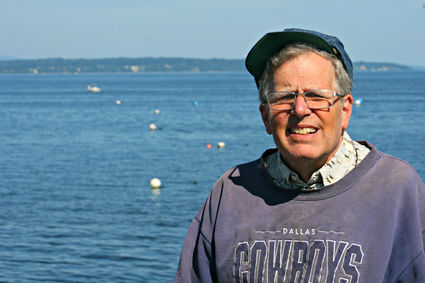 Bruce Higgins is the guru of the Edmonds Underwater Park. He hosts dives there every weekend.

Although a number of divers gathered at Brackett’s Landing North on Saturday to celebrate an important anniversary for the Edmonds Underwater Park, more than a few couldn’t help but steal glances at the inviting water.

Divers have to dive.

And although divers have been splashing into the area since the 1930s, it wasn’t until 1970 that city leaders established the park as a marine preserve and sanctuary.

In 1972, it sunk the 94-foot tugboat Alitak northeast of a dry dock submerged in 1935 to act as a buffer between the ferry dock and the park.

And it was 40 years ago, in 1977, that a string of fatal accidents there prompted Bruce Higgins to work with the city to make the park safer.

That was the cause for celebration July 8, an informal affair  with chips and dip  that drew councilmembers Adrienne Fraley Monillas and Kristiana Johnson, as well as U.S. Sen. Maria Cantwell, the latter in Western Washington for a series of town halls.

Bruce Higgins is the acknowledged guru of the 27-acre park, which extends from the ferry dock to Caspers Street. He is the leader of a group of about 30 fellow divers who meet on weekends and are the park’s volunteer stewards.

After meeting with the city in 1977, Higgins and volunteers placed the first of the numerous buoys to mark trails for safety in 1978. Today, the park has a number of manmade reefs and numerous sunken vessels  the Fossil in 1982, Mollow Brown in 1996 and the 70-foot Triumph in 1999.

In 2009, a 100-foot-long, 19-foot-high pontoon was sunk west of the Triumph. It originally was a "fender" designed to guard ship passages under one of the I-90 floating bridges.

No one has taken advantage of the park more than Higgins, who in 2007, in acknowledgement of his outstanding work as volunteer dive coordinator and the main force behind the ever-expanding list of submerged features and trails, the city named the trail system the “Bruce Higgins Underwater Trails.”

“I started the diving group in 1991 and have probably dived about 3,000 times,” said Higgins, 67. “None of this would be possible without the great volunteer effort.”

One of those diving on Saturday was Higgins’ niece, 23-year-old Shay Higgins. She graduated from the University of Washington last year and arrives every weekend ready to dive and explore. She started at age 13.

“The divers tease me, because I’m blood,” she said. “They say I’m taking over when Bruce can’t do it anymore.”

If Bruce Higgins has his say, that won’t be anytime soon.