Why I walk with my immigrant neighbors | Guest View 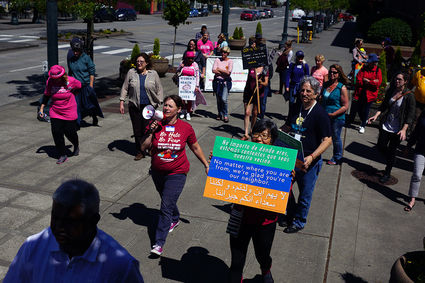 Elizabeth Vogeli of Everett uses a bullhorn and plenty of energy to lead a group of marchers along downtown Everett sidewalks Sunday, June 4. Mukilteo teacher Jeff Ferderer founded the monthly march in January following President Donald Trumps signing of an executive order effectively banning immigrants from several Muslim-majority countries. Ferderer said he and others walk on the first Sunday of each month to show solidarity with immigrants and refugees in the community.

I called a few friends and we held our own march in Everett. Twelve of us walked from the county courthouse to Grand Avenue Park and back. Our gathering became the formation of Everett in Solidarity with Immigrants and Refugees.

Since then, we have walked on the first Sunday of every month. Each time, familiar faces return and new faces join in. We all carry the same message: we value our immigrant and refugee neighbors, and we value the constitutional...