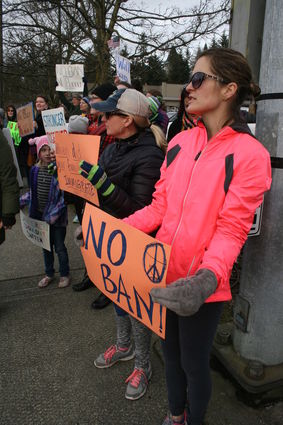 Residents of Edmonds took to the streets to protest the enforcement of immigration guidelines by the Trump Administration in February. The protests led to a proclamation by the city council that established Edmonds as a Safe City, similar to positions taken by Mukilteo, Lynnwood, Everett and Snohomish County. Mill Creek has officially taken no position on the issue of Sanctuary City.

City officials and elected representatives for the city, county and state who represent the City of Mill Creek seem to have taken a vow of silence when it comes to the city’s official stance on the controversial issue of Sanctuary City.

Seattle is just one of the jurisdictions within King County that have declared themselves as Sanctuary Cities with policies designed to not pursue or persecute undocumented immigrants.

The majority of members on the Mukilteo City Council have taken a position in favor of "safe and welcoming city" status, while Everett, Lynnwood, Edmonds and Snoho...