All about the light 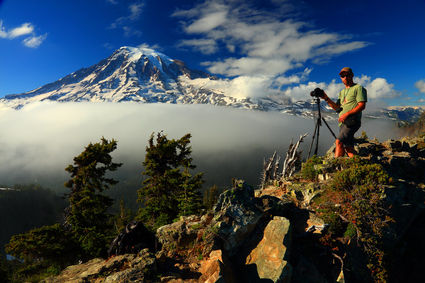 Randall J. Hodges hikes a lot for his photos. Here he is above Pinnacle Saddle in the Tatoosh Range in Mount Rainier National Park.

By his own estimation  he keeps a detailed calendar  Randall J. Hodges has hiked just about 26,000 miles. The Earth’s circumference stops at 24,901.

Hodges is a landscape photographer, which means he’s snapped a few pictures while hiking those trails, with essential nutrients and photography equipment strapped to his back.

He’s published photos in numerous books and magazines, and he sells a fair share of them as the proprietor of Randall J. Hodges Photography Gallery on Main Street in Edmonds.

Now, for the first time, he’s offering a selection of his vast catalog in a coffee-table book titled “Images of the West,” released this week. He’ll be signing copies  $39.95, plus tax  all day Saturday, June 17, from his store.

Hodges published the 208-page book through his imprint, Randall J. Hodges Photography, which also publishes the many postcards, calendars and other items you’ll find in the shop.

It’ll also be available on his website and, he hopes, soon through Edmonds Bookshop and Third Place Books.

“If I sell through Amazon, I get less than $2 a book, and I put way too much time and money into it for that,” Hodges said Saturday from his shop. He had time for a quick interview before leading a group photography lesson on Edmonds beaches.

He began the book in November and finished in April, but of course the book is a compilation of countless hours of landscape photography that he first envisioned 20 years ago.

Hodges wrote all the text in the book, which is divided into chapters on mountains and lakes, creeks and waterfalls, fall color, flowers and more. He also offers photography tips.

Hodges was lucky enough to grow up in Eugene, Oregon, where his parents frequently took him camping, instilling in him a love of the outdoors.

“I got a real love for hiking,” he said, “then I wanted to bring back pictures so people could see where I’d been. Except I had to explain that being there was better than the photos. My goal became to need no explanation, that I could show them a photo, and they could feel where I was.”

Like most photographers, Hodges first fiddled with a point-and-shoot camera. He quickly moved on to a more advanced SLR (single-lens reflex) camera with film, preferring slides to print.

Of course, he eventually made the move to digital film, reluctantly at first. “I was pushed out by the digital age,” he said. “I was a late bloomer.”

But Hodges, 49, unapologetically adheres to an old-school aesthetic, preferring an all-in-camera style that separates him from the bulk of his contemporaries. That means the completed images seen in his store and online are the result of techniques used during shooting.

In other words, he doesn’t Photoshop his images after the fact.

Hodges builds a color palette in his camera, what he calls a “digital roll of film.” He relies on old-school techniques to highlight color and light in his landscapes, with small apertures, long exposure, a healthy depth of field and low ISO (exposure).

He slips a circular polarizer on his lens during the day, switching to graduated split neutral density filters for sunrises and sunsets. These manage glare and reflections.

“It’s just a digital darkroom. A lot of people (have the impression) that I’m better than those who use Photoshop. It’s just the opposite. I do what I do to be different, not to be better. It’s actually a handicap. You can’t do focal stacking, use luminosity masks. For me, the light just absolutely has to be perfect.

“There’s nothing wrong with Photoshop. There’s a whole host of collectors who like my work. On the other hand, there are those who don’t because there is a Photoshop look, a certain softness, multiple images being stacked together.”

The secret to a good photographer?

“Do it your way,” Hodges said. “There’s a billion photographers and a billion ways to come up with an image. If the way you’re doing it is making you happy, then you’re doing it right. The biggest compliment I can get is when people think my work is so good it must be fake.”

Before making photography his full-time profession, Hodges partook in two other passions: cooking and music. He was a manager at Olive Garden and a chef for the Federal Reserve Bank in Seattle.

And for a decade in Puget Sound, he showed off his guitar, drumming and singing skills in hard-rock bands with such memorable names as Emptied Skin and Bent Direction.

The secret life of a photog!

But photography was always No. 1. For the first 14 years of his photography career, Hodges trekked around the Pacific Northwest’s art show circuit, averaging 26 a year. But his goal was to open his own gallery and leave the shows behind; he spent five years researching options in both Washington and Oregon.

It seemed he always came back to Edmonds, where he said the Edmonds Arts Festival  celebrating its 60th anniversary this weekend  was always one of his better shows.

And it didn’t hurt that there weren’t any photo galleries in town. From his home in Lake Stevens (he now lives in Mukilteo), he opened up his gallery in March 2014 at the former home of The Wishing Stone, which moved two blocks east.

When he’s hiking, Hodges has an employee manage the store. His wife, Danielle, also helps out. When he returns, he’s planning his classes, as there’s nothing he likes better than showing how he does what he does.

In addition to lessons at the beach in Edmonds, he offers classes around local mountains and lakes, treks to photograph fall colors and even trips out of state to places like the Grand Tetons in Wyoming and Silver Falls State Park in Oregon.

“Students don’t hike like I hike,” he said. “I have different levels of classes: five miles a day to 200 yards, to backpacking classes where you have to really be a hiker or backpacker.”

The proverbial lightbulb going off in a student’s head is Hodges’ favorite moment.

“When my students get it, and they put the picture in the camera, there’s an excitement that I love seeing. It never gets old. When I hear them say that’s the best photo they've ever taken in their lives, I’m doing the right job.”

If you take a class from Hodges in Edmonds, you must bring a couple of necessities: a good SLR camera, for one. Another is a tripod. “The No. 1 rule for landscape photography is a tripod,” he said. “If you don’t have a tripod, don’t bother.”

He tells a story to illustrate the point. It was about 25 years ago that he stumbled upon a man in the bush in Montana’s Bob Marshall Wilderness Area. The man trained his camera on something in the distance.

“I snuck up on him and said, hey, what are doing?” Hodges said. “He said shooting woodpeckers, and I said oh, that’s cool, man. He had a big lens. I told him that someday I wanted to be a professional photographer - could he offer me one tip? He asked me where my tripod was. I said, I’m a hiker; I can’t carry a tripod. He said, well, throw your camera in the river, quit and go home.”

Tripod it’s been ever since.

Hodges  who shoots with a Canon 5D Mark III  tells his students that a tripod, in addition to minimizing shake, helps create a depth of field important to landscape photographers. In other words, put some foreground into that perfect shot of Mount Rainier instead of having it fill the entire frame. 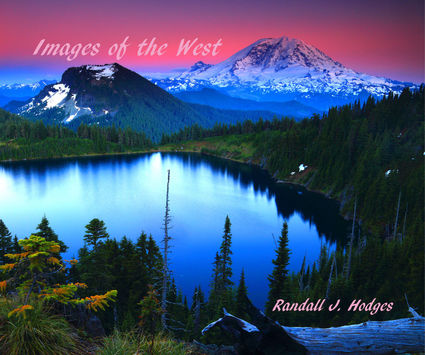 That’ll help lead the eye to the mountain.

So foreground is stressed in lessons, as is learning to control aperture and shutter speed, essential to those who want to take their photography out of the automatic-button phase.