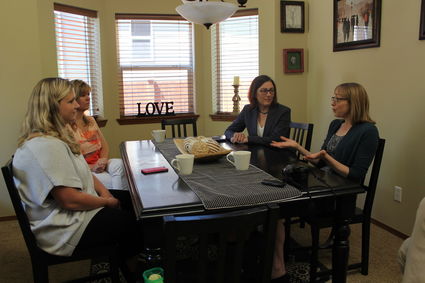 Congresswoman Suzan DelBene (second from right) sits across the table from two mothers with children who have pre-existing conditions during a Kitchen Table meeting last week. Suzy Matter (second from left) of Mill Creek urged the lawmaker to continue her opposition to the Republican healthcare plan designed to repeal and replace the Affordable Care Act. Matters son, 16-year-old Colton, has had five bouts with cancer over the past seven years.

The optimistic smile on the face of Mill Creek resident Suzy Matter disappeared, and her voice began to crack when she described the days and weeks she has spent at Children’s Hospital over the past 16 years while doctors treated her son for high risk Acute Lymphoblastic Leukemia.

“It usually happens when I share Colton’s story with people for the first time,” Matter said in a soft voice. “I’ve told his story so many times during his life that his struggle is something that brings out my raw emotions.”

Matter and another mother met with Congresswoman Suzan DelBene last week to discuss how the changes proposed by Republicans in Congress would impact the lives of their children.

Colton is now a 16-year-old junior at Jackson High School. He has gone through five bouts with cancer in the past seven years and has given up his dream of playing professional baseball, but serves as the official scorekeeper for his younger brother’s team.

“Dealing with cancer is a burden that no mother should have to deal with for their child,” Matter said. “The ACA (Affordable Care Act commonly known as Obamacare) at least gave me and the other parents we’ve met at Children’s Hospital some hope with the knowledge that somebody cares.”

Matter said the healthcare legislation approved by the Republican-controlled House of Representatives last month would create financial and emotional crises for the parents of children with pre-existing conditions. She is especially concerned how Colton will survive on his own when he is no longer covered by his parents’ healthcare when he turns 26.

“Cancer is one more thing that parents and kids should not have to deal with. Ever.” she explained. “Healthcare for all should be a right.”

DelBene agreed with her constituent. The Democratic lawmaker who represents Washington’s 1st Congressional District told Matter that the ACA was only the first step in the government’s responsibility to care for every citizen.

“We must strengthen our nation’s health care system by incentivizing high-quality patient care, reduce costs and expand access for our most vulnerable populations,” DelBene told the intimate kitchen table gathering in Snohomish.

“We need to continue working to control the rising cost of health care for Washington’s families by supporting preventive health services and promoting greater efficiencies in health care delivery.”

The congresswoman went on to tell the women that she is committed to increased investments in medical research at the National Institutes of Health (NIH) and other federal agencies.

The investment is needed, she said, to maintain America’s role as a global leader in ground-breaking discoveries and to accelerate the speed with which new cures, treatments and vaccines are developed.

DelBene and Matter met at the home of a mother of a young boy who suffers from Severe Hemophilia that requires daily injections that cost $550. The mother was concerned with the lifetime cap on medical benefits. The mother said her son Sammy has already exceeded the $1 million limit in the proposed replacement to ACA.

“We cannot go back to the way things were before ACA,” DelBene told Sammy’s mother. “I agree the ACA needs to be reformed, but the Affordable Care Act made sure that families would not go bankrupt trying to pay for healthcare.”

Colton and his mother created Colton’s Army to provide support for other families faced with life-threatening diagnosis. The Army is now a non-profit organization dedicated to fight cancer and “help pay back a portion of the hope that Children’s Hospital gives to patients and families.”