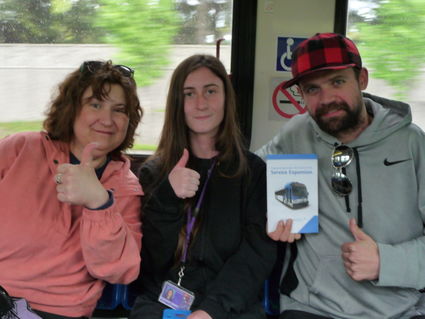 This trio of Community Transit riders were thrilled to learn the systems board of directors had bowed to public pressure and voted not to reduce service to portions of Route 115 that serve Mill Creek along the Bothell-Everett Hwy.   Jewels McAuliffe (left) lives at the Laurels Apartments and has become dependent on public transit due to car troubles. Kasey Rackowitz (center) relies on CT to get to and from the skate park. Bryan Dennis (holding pamphlet) was relieved to learn that he would not be forced to ask friends and family for rides.

The final plan approved by the CT board differs slightly from a proposal offered to riders in March based purely on customer feedback, according to CT spokesperson Martin Munguia.

“Community Transit exists to serve the needs of our riders,” Munguia told The Beacon. “The boardand our CEO (Emmett Heath)  heard the public outcry an...