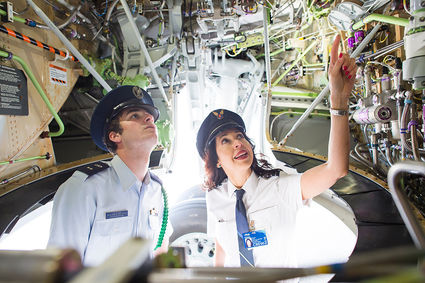 First Officer Patty Tomich, right, shows Avery Hammerman wiring inside a Boeing 737 that detects overheating or fire in the engines during Alaska Airlines Aviation Day held May 6 at Seattle-Tacoma International Airport. Paine Field Aviation Day is set for Saturday, May 20.

I’ve lived in Mukilteo next to Paine Field Airport my entire life, and I’ve always been focused on the sky. It’s odd to me that people can look up at planes cruising overhead and not have an overwhelming desire to be at the controls.

Although I’m still in high school, I can point to the day my aviation career got started. In 2014, I was introduced to Civil Air Patrol (CAP) Cadets with the U.S Air Force Auxiliary. They were volunteering at Paine Field Aviation Day. The fun I had with them that day convinced me to attend a squadron meeting.

The rest, as they say, is history. I soon became a cadet airman basic in CAP. Today, I am a cadet first lieutenant and the cadet commander of the Paine Field Composite Squadron. The leadership and aerospace opportunities that CAP has provided me are hugely influential on my life today. Without CAP, I would never have met my Alaska Airlines mentor.

Alaska Airlines interviewed and selected me to be a student reporter for its Aviation Day, held earlier this month at Seattle-Tacoma International Airport. As a student reporter, I get to share my knowledge with my peers on how to get started in a career in aviation.

My introduction to this position came when I met my new mentor, First Officer Patty Tomich, at the Alaska Airlines hangar at Seattle-Tacoma International Airport. Tomich attended Embry-Riddle Aeronautical University and has been flying for Alaska Airlines for 22 years.

On Aviation Day, Tomich met me at the airport and led me up the steps to the newest Boeing 737 in Alaska Airline’s fleet. In the cockpit, she explained the equipment that she uses on a daily basis, we performed several pre-flight tests, and then I bombarded her with questions about the aircraft.

I also got VIP access to the inner workings of the airlines: I sat in the captain’s seat of a brand-new Embraer 175, I greeted guests as they entered Alaska Airlines’ special “Honoring Those Who Serve” Boeing 737, and I went on stage with my fellow student reporters to share our experiences with our peers.

Then, Tomich and I finished the day by walking through the systems in the landing gear compartment of a 737-900ER.

My time at Aviation Day was simply amazing. I’m saving the date already for next year because it’s an event that is helping me forward my career. For those of you who want to get into aviation, there are so many opportunities  Civil Air Patrol, TeenFlight, Museum of Fligh, and the list goes on.

So, visit a Civil Air Patrol Squadron meeting, attend an Aviation Day, soak up all of the advice you can and find a mentor. Soon, you’ll be the one flying a plane, inspiring kids squinting into the sky with dreams of taking the controls.

Avery Hammerman, a sophomore at Kamiak High School, is an Alaska Airlines student reporter and a first lieutenant in the Civil Air Patrol, which is the U.S. Air Force auxiliary.