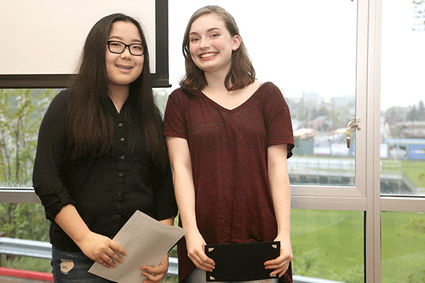 Heidi Kim (left) was all smiles when she learned that her artwork would be on permanent display in the administrative offices of the Everett Public Schools. The visual art created by the sophomore from Jackson High titled Ashley was awarded the Superintendents Choice Award by Superintendent Gary Cohen. Jackson High senior Rebecca Strom (right) earned the Visual Arts Scholarship in a clean sweep of awards by students from the Mill Creek high school.

Jackson High School sophomore Heidi Kim will have her work on permanent display in the district office of the Everett Public Schools after being honored in the 19th annual Visual Art competition for visual arts presented by the Everett Schools Foundation in late April.

Entries in the middle school competition will be on display at the district’s Community Resource Center from 7:30a.m. until 4:30p.m. from May 3 until May 8. The top entries in the elementary school category will be displayed at the center from May 23 until June 6. The middle school awards ceremony is scheduled for May 15 from 6 until 7:30p.m.