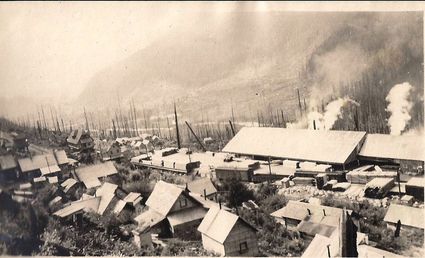 This photo shows the town of Alpine in the Upper Skykomish Valley in the autumn of 1918. It was taken by Doris Bell, who was the high school teacher in Alpine during the 1918-19 school year. Originally named Nippon, the town was first built to house Japanese railway workers. The town sat a mile from the nearest road. In 1903, a local lumber baron renamed it Alpine. Around 1918, an estimated 200 people lived in the active logging town. Ten years later, the estimated population was 400. The town was evacuated and intentionally burned in 1929. Today, little more than nature remains.

Many of us travel Highway 2 over Stevens Pass. In the winter, it may be to ski; in the summer, for a visit to Central or Eastern Washington.

Do you ever think about what you are passing through, or do you just drive to get where you are going as quickly as possible?