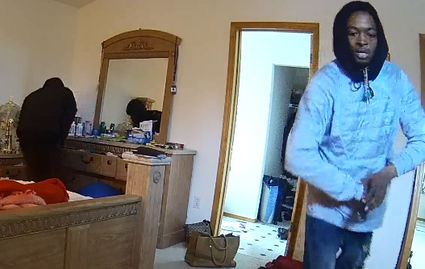 This photo, taken from a webcam video, shows two men inside the bedroom of a home in south Everett. The men are suspected of breaking into the residence and robbing the homeowner, who was present during the incident.

A webcam captured two men breaking into a south Everett home and robbing the homeowner before fleeing Wednesday morning, March 29.

“She had a web camera in her house, and it captured everything,” Shari Ireton, communications director for the Snohomish County Sheriff’s Office, told the Beacon.

Detectives are asking for the public’s help in identifying the two suspects, described as black males in their 20s, who forced their way into the home by kicking in the door, according to police.

A video of the robbery shows the men scouring a bedroom, as well as entering another room where the homeowner had apparently been hiding. The homeowner, who sustained minor injuries, can be heard screaming as the men confront her off-camera and, according to police, rip jewelry off of her. 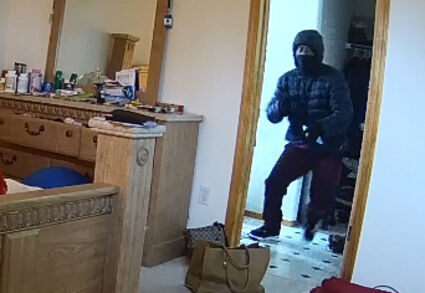 This photo, taken from a webcam video, shows a partially masked man in a room off the bedroom of a residence located west of Mariner High School in south Everett. Two men are suspected of breaking into the residence and robbing the homeowner, who was present during the incident.

The robbery occurred at about 10:30 a.m. at a residence a few blocks west of Mariner High School, which is located at 200 120th St. SW in Everett. Ireton said her office is not releasing the exact address of the residence in order to protect the homeowner.

“She’s extremely frightened,” Ireton said of the homeowner. “I would like to give her a day or two to recover.”

Anyone with information about the incident or either suspect is encouraged to contact Detective Geoghagan at 425-388-5258.

Ireton said, “We really want to find these guys.”