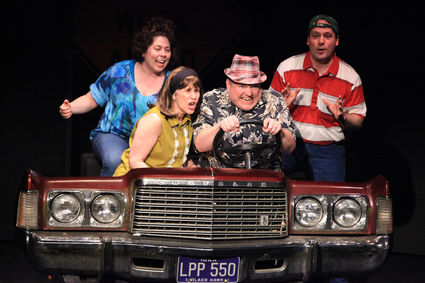 The family road trip. It has the astonishing capacity to transform itself from something akin to a root canal into a pleasant, warm fuzzy memory. Somehow, we look back on mile after mile of unremitting boredom, carsickness, claustrophobia, body odor and sibling torture  and we find ourselves smiling.

When standup comics Tim Clue and Spike Manton set out to write a family friendly comedy about the vagaries of the family road trip  they seem to have struck a chord  they ended with the wildly popular play “Leaving Iowa,” which has been performed throughout the country to appreciative audiences.

It’s Driftwood Players’ turn to take a crack at it, with the show opening Thursday and playing through April 2. I’m optimistic that this one will be worth seeing.

“I think that one of the reasons we choose this play is that it resonates with so many of us,” director Eric Bischoff said. “Road trips seem crazy and nutty and a waste of time, but when we look back we say, wow. That really was something.”

Bischoff, actively involved in the local theater community for a long time, took a lengthy hiatus to concentrate on raising his kids, but rejoined Driftwood over the last few years. He said one of the most interesting aspects of this production has been watching the actors who play the family develop into a virtual family themselves.

The “children” tease and cajole each other and the “parents” even began arranging rehearsals and get-togethers for the “family.” One suspects this should make for some very persuasive performances.

Another explanation for the success of “Leaving Iowa” nationwide may be its versatility  apparently, an ensemble of six to 24 players can perform it. Driftwood kept it at six with four family members and (in my opinion) the enviable roles of “multicharacter guy” and “multicharacter gal.”

But “Leaving Iowa” is more than just a road trip reminiscence; it also recognizes self-awareness. As the son returns to fulfill a family obligation, the impact of those long-ago road trips begins to dawn on him  it’s the budding appreciation of one generation for another. Something that can only truly be understood with the passage of time.

Perhaps even more importantly, “Leaving Iowa” should be good for at least a half a dozen full-on belly laughs and should make for a very enjoyable evening.