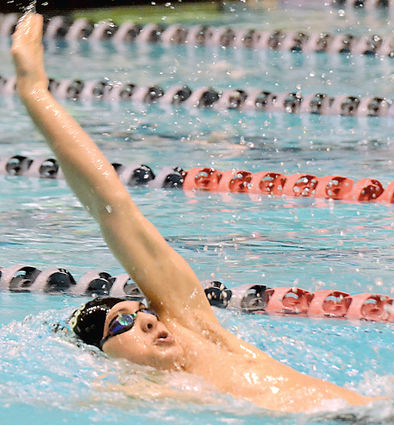 Jackson’s Jonathan Cook is living proof of that.

Going up against a longtime and talented rival, Cook not only successfully defended his 4A state swimming titles in the 200-yard individual medley and the 100 breaststroke, he set two meet records in the process Saturday, Feb. 18, at the King County Aquatic Center in Federal Way.

The Jackson junior then faced his biggest challenge in the 100 breaststroke, an event in which Dang came into Saturday’s final with the fastest qualifying time (55.00) ahead of Cook (55.35).

“I’m over the moon with that,” Cook said of his 100 breaststroke time.

A blazing start to the race set the stage for Cook’s record- breaking performance. Cook completed the first 50 yards in 25.51.

Cook added that competing against Dang definitely helped him elevate his performance. Cook was 10 years old when he started swimming against Dang, who a little under 2 years younger.

“That didn’t stop him from coming in and beating me,” Cook recalled.

Having a talented rival motivated Cook.

“Without him there, I wouldn’t have the inspiration to be as hungry as I am,” Cook said. “You can look at records.  Records push me, but an actual person there pushes me even harder.”

Jackson coach Drew Whorley was expecting the 100 breaststroke to be a close race.

“He knew he was going to be pushed,” Whorley said. “He was just ready to go.  He just went out and swam very aggressively, which is kind of what we talked about. He was feeling good.”

Cook’s goal in the 200 individual medley was to have every split under 30 seconds. The challenge for him was the breaststroke. After the race, Cook saw that he accomplished his goals and that his breaststroke time was 29.99. His overall time was a personal best by a full second.

“The attitude for him the entire year was he wanted to come back and break that meet record,” Whorley said. “The fact that he was so close made it a realistic goal and I think that was an important thing for him. It wasn’t about winning the event. It was about there’s a time that is something attainable.”

Cook plans to continue swimming in college and felt that his performance speaks volumes.

“What I did today is a good statement to help convince people I’m the kind of swimmer they want at their school,” he said. “I’m really excited with this.”

Whorley said that beyond his obvious gifted technical skills, Cook puts in the hard work at practice. Cook also has a strong mental game.

Cook had the belief in himself, the confidence to be aggressive in his races and the belief that he was going to be able to finish those races strong, Whorley added. 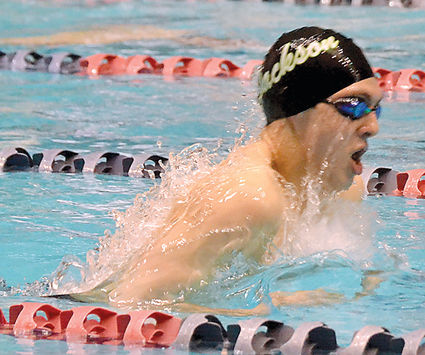 Jackson's Jonathan Cook competes in the 100 breaststroke finals. Cook won the two events and also set meet records in both.

“I have great people who have set the bar pretty high,” Cook said. “I’m excited to raise the bar even higher.”

FAMILY SUPPORT: Jackson’s Jonathan Cook appreciates the support his parents have provided him. Cook finally got his driver’s license a little over a month ago. “They’ve been driving me to practice for nine years,” he said. The Cooks have provided more than transportation for their son. “They have always told me that I get to do swimming because I like swimming,” Cook said.

“If there’s ever a point where I’m hung up on swimming or I don’t want to do it anymore, I don’t have to. But just having that support to know that I’m free to do whatever I have fun with is amazing and what I have is fun with swimming. So I’m grateful.”