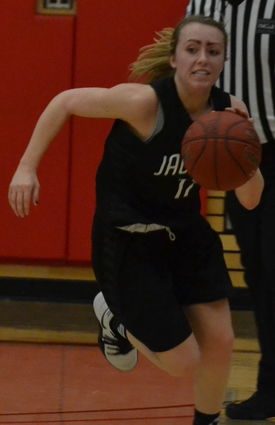 Jackson's Emily Brown brings the ball up the court against Kamiak during a 4A District 1 tournament game.

The future is looking promising for Jackson.

The Timberwolves advanced to the 4A District 1 girls basketball tournament for the second straight year and this time they went 2-2.

Jackson’s season came to an end with a 57-44 loss to Kamiak in a loser-out game Thursday, Feb. 16, at Everett Community College.

The Wolfpack graduate only two seniors, one of whom  Emily Brown  was a starter and return a largely sophomore-dominated starting lineup.

Jackson fell behind 16-4 in the first quarter and spent the rest of the contest playing catch up. The Wolfpack cut the deficit to 7 points in the second half but couldn’t sustain the effort against a Kamiak squad that started five seniors.

The Timberwolves needed to secure every rebound in order to continue to cut the deficit, Morris said.

The Jackson coach is looking forward to the future.

“It’s stages that you grow in each year,” Morris said. “We’re optimistic about all the progress that we made.”