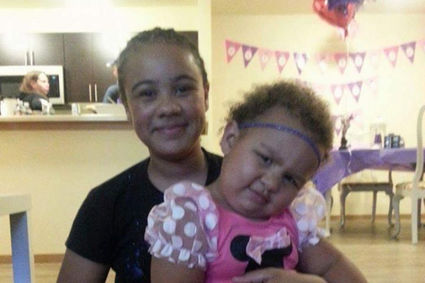 Amiyah Johnson, left, and Yesterday Wallace were killed Friday, Feb. 3, in a multi-car crash on I-5 near 164th Street SW.

A former Edmonds resident who lost her young daughter in a horrific traffic collision last week wants people to know how special she was.

“When she left the supermarket, she always blew kisses to those she saw,” said Emily Dick, 37, who graduated from Edmonds-Woodway High School in 1998 and, before that, Madrona K-8. She now lives in Everett.

According to the Washington State Patrol, the crash  which happened shortly after 3:15 p.m.  caused a 9-mile backup. Yesterday and Amiyah were riding in a 2000 Nissan Quest minivan driven by a 43-year-old Danny Ivy. Also in the car was his ex-wife, 39-year-old Melissa Dick, who is Emily Dick’s sister and mother to Amiyah and two sons, 7-year-old Jo Deutong and 5-year-old Marcus Deutong, who were also in the van.

The van was following a 2006 Chrysler 3000 driven by 52-year-old Elizabeth Abuan. When both slowed for traffic, a Ford F250 pickup driven by 51-year-old Todd Brown rear-ended the van, which pushed it into the Chrysler.

Although rescuers performed CPR, Amiyah  who attended Olympic View Middle School in Mukilteo  was pronounced dead at the scene. Yesterday was transported to Harborview Medical Center. Emily Dick said she was revived multiple times, but died after surgery at 9:20 p.m.

Ivy and Melissa Dick were taken to Providence Hospital in Everett with injuries. Neither Brown or Abuan was injured.

In addition, Jo Deutong suffered a broken leg and underwent emergency bladder surgery. His brother suffered a shattered pelvis and many broken bones.

“Both will be in wheelchairs and at Harborview for the next six weeks at least,” Emily Dick said. “Then they will need to learn to walk again.”

Ronald Savyon Wallace, Yesterday’s father, created a GoFundMe account Feb. 4 to help with expenses. As of 3 p.m. Wednesday, the fund had more than $19,100 in contributions from more than 350 people. The goal is $30,000. Those who want to make donations can go to www.bit.ly/2k0Qmez.

“Until we meet again,” Wallace wrote in an email to the Beacon. “You will always be momma’s best friend and daddy's li’l girl."

A celebration of life for both Yesterday and Amiyah begins at 11 a.m. Friday, Feb. 10, at Bethany Christian Assembly, 2715 Everett Ave., Everett.

Following the ceremony and Amiya’s burial at Cypress Hill Cemetery in Everett, family and friends will gather at the beach in Mukilteo, where they will release balloons and lanterns.