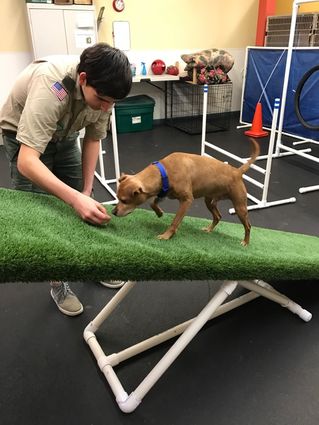 NEW BALANCE  Boy Scout Justin Statile uses some cheese to lure the timid min-pin mix Christopher across the teeter-totter he built for the Homeward Pet Adoption Center in Woodinville. The Mill Creek teenager donated an entire agility course to the no-kill shelter to fulfill the community service requirement he needed to reach the rank of Eagle Scout.

Mill Creek teenager Justin Statile had just one-word to say when he learned about the need for exercise equipment for rescued dogs at the Homeward Pet Adoption Center in Woodinville.

The senior at Archbishop Murphy had struggled to find a project to fulfill his required community service project to become an Eagle Scout until he shared his frustration with his mother.

“Justin wanted to find something he was passionate about,” remembered Michele Statile. “We looked across the room to our rescue dog (Ginger), who is dying of cancer, and he immediately knew who he wanted to help.”

Over the next few months the 18-year- old Statile solicited more than $600 in donations from local businesses to offset the cost of construction for an agility course he wanted to build for dogs at the no-kill shelter waiting to be adopted into their forever home.

The confident Boy Scout used paint, PCV piping, carpet cutting tools and other materials donated by the Home Depot store in Bothell to build many of the obstacles. He covered an A-frame with sand decking to make it easier for cautious pups to climb the steep sides of the obstacle, then painted everything in the pale blue and purple colors used by Homeward Pet.

Statile used a bicycle tire donated by Bicycle Centres of Silver Lake for the tire jump and covered the teeter tooter and paws table with Pet Turf contributed by Synthetic Turf NW in Monroe. He collected toys from One Fat Cat that will be used by volunteers who come to Homeward Pet to exercise the rescued dogs.

The completed course includes a teeter-totter, an A-frame, paws table, weave polls, a tire jump and an adjustable bar jump.

“It took months to collect everything I needed. But building the course only took three days over the school holiday,” he said. “I was able to deliver everything to Homeward Pet on Dec. 23rd, just in time for Christmas.”

The determined Boy Scout also donated $200 in extra Pet Turf and the $243 in cash he received to the shelter. Statile is a member of Troop 61 that meets in Lynnwood.

Kimberlee Zuckerman is the animal behavior coordinator at Homeward Pet. She said the agility course built by Justin has not only helped to exercise many of the dogs, but stimulate the natural instincts of some of the more active breeds.

“The agility course will be used for mental stimulation as well as to build confidence in some of the more-timid dogs we have,” Zuckerman said. “This is something that we’ve wanted for a long time to keep the rescued dogs stimulated and active.”

Zuckerman said Homeward Pet takes in homeless animals from across the state and finds new homes for over 1,600 cats and dogs, puppies and kittens every year. More than 400 volunteers help walk dogs, play with cats and clean kennels at the shelter. Homeward Pet has matched 26,000 animals with safe with loving families since it opened in 1990.

Justin was front-and-center last week when Lindy Langum from the Canine Fun Zone in Seattle came to Homeward Pet to share tips on how to maximize the stimulation dogs receive from an agility course.

“I was eager to see how the dogs would respond to the agility course,” said Statile. “You put in lots of work, but you can never be sure how a dog or cat will react to a new toy.”

Statile had planned to major in premed when he begins college, but has now expended his options to the possibility of becoming a veterinarian.