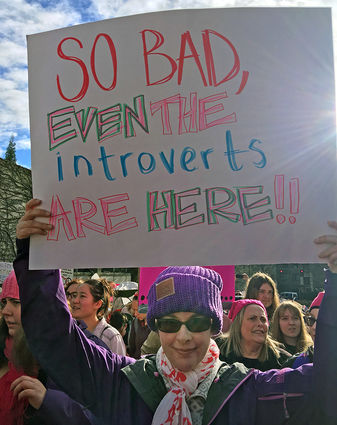 Jenny Fitzpatrick, 34, of Mukilteo travelled to Seattle with her 60-year-old mother Jan. 21 to join 175,000 others for the Womens March in Seattle, one of hundreds of marches worldwide that attracted more than 5 million people in all.

When I told my grandmother about my participation in the Women’s March on Saturday, she echoed back to me a mantra that I’ve been repeating to myself for the past year.

“I will never forget the line from the latest Cinderella movie, when her mother told her to always remember, ‘Have courage and be kind,’” she said. “That is what the march said to me. And that is what you ladies personified.”

I don’t like crowds, and I’ve never been to a march before. Before setting out that morning, Jan. 21, I told myself to approach the day with curiosity and a sense of adventure, instead of expecting to arrive at any particular outcome or destination.

My mom and I had tried to get a spot on one of the charter buses organized to depart from Edmonds, but they filled up quickly. So, plan B involved driving down to the Seattle Center so we could catch a shuttle or city bus to Judkins Park, where the march would begin.

We got down to the Seattle Center just fine, and took a place in line with a bunch of marchers to catch a shuttle to the park. But, soon, we began to hear reports that the start of the march was already much more populated than the organizers had anticipated. The shuttles were overwhelmed.

Hoping for the best, we continued chatting with the women and men in line with us. It started to sprinkle slightly. Hoods went up, but smiles remained and voices carried over the traffic passing by. Many cars honked in support and encouragement upon seeing us gathered with our signs.

I thought to myself, “even just in doing this we are building community, one small group at a time.” It felt good to be surrounded by these people. I was also looking forward to seeing the many local community groups at the park who were there to raise awareness and sign up volunteers. But, by 10 a.m., the shuttles still had not arrived.

Then, something extraordinary happened.

I’ve been in many crowds before  at sporting events, concerts, Disneyland (shudder)  and usually people grumble bitterly over inconveniences like missed transportation. But, here, faced with no shuttle, I heard around me determination instead of disappointment.

A fellow marcher organized the line to begin walking from our end along the route, so we could meet the march halfway. As we headed downtown, the rain showers ceased and the clouds dissolved. By the time we reached 4th Ave. and Pine, the sun had begun to shine down on us.

In the triangle park at Westlake Center, a steel drum band began to play some cheerful rhythms. The sidewalks filled as we waited for the marchers to arrive. It felt much like any of the Fourth of July celebrations I have attended, with young and old waving flags awaiting the parade. This time there were also signs and pink hats. It felt very patriotic. The bicycle police rode through first, clearing the road to an outburst of cheers.

I’m so grateful to live in a country where the march I attended was legal, safe and peaceful. I made a point to thank the officers I saw along the route for making it possible, and I heard several other people do the same. The officers smiled at us and seemed relaxed as they waved us on. The overall feeling of the march, as I perceived it, was calm, confident and determined to make our community better through perseverance.

After a few minutes, we began to see our fellow marchers.

The front of the march, the place of honor, belonged to the indigenous women from local native tribes. Their entrance with drums and beautiful banners was exhilarating and humbling. I have the chills now just thinking back on it. I stood in awe and reflection as they passed, and then my mom and I joined in behind them.

The march brought many different people together for one day, but civic engagement is an effort that mustn’t be allowed fade with the last echo of our footsteps.

On Monday, Jan. 23, the organizers of the march launched a campaign called 10 actions in 100 days, with more information at http://www.womensmarch.com/100. The first action is to “Write a postcard to your Senators about what matters most to you - and how you’re going to continue to fight for it in the days, weeks and months ahead.”

The most poignant sign I saw during Saturday’s march evoked an even simpler call to action that anyone can take up, regardless of their politics or religion or any other category you want to insert. It simply said, “Encourage her.”

I plan to follow that advice because I know its value. It was, after all, the support of my family and community and my country that gave me the courage to march.