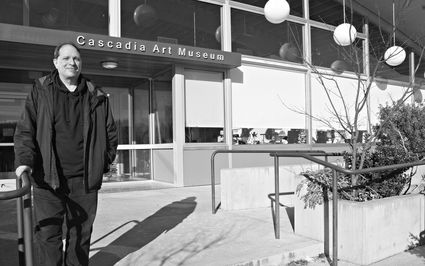 When museum owner and Cascadia Art Museum curator David Martin dove into the artwork of brilliantly talented but forgotten early 20th century Northwest artists, it seemed there was nothing that could derail his single-minded quest to introduce them to the world.

OK. There was one thing.

“I started contacting people at local museums, and no one was interested,” Martin said. “They weren’t even slightly interested. In fact, they were hostile, to be honest with you. And this was women curators, most of the time.”

Today, Martin is acknowledged as the preeminent art historian on the paintings, prints, photography and sculpture created exclusively by artists active in the Northwest during the late-19th through the mid-20th centuries.

His calls are returned now.

“David is the dean of Northwest art curators,” said Cascadia founder and President Lindsey Echelbarger. “Cascadia is incredibly lucky to have him in that position. No one knows more about early Northwest art than he does. He is Mr. Early Northwest Art.”

Martin’s talents in securing art can be viewed once again at Cascadia Art Museum beginning Jan. 19 with the new exhibit, “Northwest Social Realism & the American Scene: 1930-1950.”

It’s a huge show, filling three of the museum’s six galleries. It highlights Northwest artists and their depictions of scenes of everyday life in the Northwest during the period, as well as many works that reflect the industrial, political and social aspects of the Depression and World War II.

Beginning in the late 1920s, many younger American artists vigorously turned away from the dominant influence of European Impressionism and Modernism in their search of a new representation of America.

These artists drew on subject matter depicting elements of their individual regions, and often celebrated the urban and rural environments as well as local industries and recreational activities.

Some Northwest artists used their talents to reflect their interest in communist and socialist ideology, as well as labor causes and racial and class inequities. The Leftist movement was so strong in Washington state that, in 1936, Postmaster General James Farley said: “There are 47 states in the union, and the Soviet of Washington.”

From rock to art

“We didn’t become famous,” he said, smiling at the memory, “but we opened for some well-known musicians.”

But art soon become his passion, as it does for many who fall under its spell, and he satisfied his hunger for it through books.

One day, while in a Buffalo gallery, Martin glanced upon a painting of his beloved hometown, Niagara Falls, lovingly depicted in a painting by one Claire Shuttleworth, circa 1912.

“I thought it was a Monet,” Martin said. “I asked about it. Who’s this artist? She’s really fantastic. And they brushed it off; she’s just a local, they said. Well, I went to a library for research and found that she had died in 1930 and was known in Paris and all over the world, especially for her Impressionism painting.”

Martin was determined to purchase a Shuttleworth painting but guessed it might prove difficult, as he was young and poor, like many budding art historians. But it turns out that didn’t matter.

“I found a beautiful painting by her for $25. So I started collecting art like that, for practically nothing, for what I would call museum-quality paintings.”

After acquiring paintings and working at a gallery in Phoenix for five years, Martin moved to Seattle with his partner, Dominic Zambito, and together they opened Martin-Zambito Fine Art on Capitol Hill in 1989. (The museum is now in the historic Henry H. Dearborn House at the intersection of Minor Avenue and Seneca Street on First Hill.)

Many of the artists Martin chose to focus on were women, Japanese-Americans, gays and lesbians, and other minorities who cemented national and international reputations from 1890 to 1960.

“Everyone knows about Mark Tobey and Morris Graves,” Martin said, singling out two artists from the Northwest School, both of whom, ironically, had homes in Edmonds. (There were two others in the “Big Four”: Kenneth Callahan and Edmonds High School graduate Guy Anderson, who was born in Edmonds in 1906.)

He’s largely succeeded, as the gallery’s championing of women and minority artists has established it as a leading source for collectors, curators and art historians who concentrate on the turn of the 20th century through the early 1960s.

When Martin began collecting in Seattle, he discovered that some of the early artists of the 20th century remained in the area and were very much alive. One of them, Yvonne Twining Humber, he found after thumbing through what is now a 21st-century relic: the phone book.

Humber would go on to became a grandmother-like figure to Martin and Zambito. More importantly, the relationship led to introductions with other forgotten artists.

“Many of them still had all their work, because nobody bought it,” Martin said with a laugh. “I thought, my God, what’s going on here? There’s this whole varied history of Northwest art that nobody knows about. The quality of work was incredible.”

Many of the artists he discovered were women.

“If they were women, there was prejudice against them at the time. They weren’t taken seriously. Post-1960s, in the opposite of feminist movement, women were trying to get equality, but the art they created was swept under the rug.”

At the same time he discovered the neglected artists, Martin  who also was program director for Seattle Art Museum’s American Art Council  had a fruitful meeting with Joan Murray, one of Canada’s leading art historians. He showed her some of the artwork he’d collected.

“She was flabbergasted at the quality. Then I told her that I couldn’t get anyone to write articles about the artists.”

Murray’s reply? Do it yourself.

Today, he is the author of several award-winning regional catalogs, and contributes essays and catalog entries for national and international publications on painting, printmaking and photography.

He also has written a series of articles on Northwest art for Historylink.org, Washington state’s online encyclopedia.

One of his best-known books, available at Cascadia Art Museum, is “Shadows of a Fleeting World: Pictorial Photography and the Seattle Camera Club.” That publication led to an invitation as the closing speaker at an international symposium on Pictorialism in Berlin, in 2013. He lectured the next year in London.

It seems only natural now that Lindsey Echelbarger and David Martin would collaborate on Cascadia Art Museum, which opened in September 2015 in the former Safeway and Waterfront Antique Mall building. It shares space with 190 Sunset restaurant, Scratch Distillery and Brigid’s Bottleshop.

“I’ve known David for over 30 years,” said Echelbarger, who has collected Northwest art  including pieces from Martin  for decades. “As art collectors of the early Northwest, we were frustrated over the years that the field got very little attention from other museums.”

Long story short, Echelbarger asked if Martin would be curator if he opened an art museum in Edmonds devoted to early Northwest art. Of course he said yes, and began collecting, most of it from families who donate or loan to the museum.

Martin said that “Northwest Social Realism & the American Scene” depicts an engaging era in the Pacific Northwest. The birth of Modernism, which arrived in the U.S. with the 1913 Armory Show in New York, brought into focus a battle, as it were, between realism and abstraction.

Yvonne Twining Humber, Martin’s grandmother figure and an artist represented at the Edmonds show, like many artists born at the turn of the century rebelled against European Impressionism and the often stern, fancified art depicting the elite, famously practiced by John Singer Sargent.

Although many Northwest artists followed national trends and made political statements with their art, such as Abe Blashko, who is represented in Edmonds, Humber simply wanted to glorify everyday life.

Other artists in the show made their statements with art portraying laborers and the working class as heroes, the antithesis of Sargent’s oeuvre.

“Even though Washington state has a strong history of labor activities and progressive social values,” Martin said, “very little research has focused on the regional visual arts reflecting these subjects, especially from the turbulent era of the Great Depression.”

Both Martin and Echelbarger say they’re pleased with the current exhibit and the growth of Cascadia Art Museum.

“David and I and my wife Carol talked over the years and came to realize that the Northwest was far behind other regions in country in appreciating regional art,” Echelbarger said. “We’re really lucky to have a host city in Edmonds, which has always been supportive of the arts.”

The museum now has more than 600 members and counts more than 40 volunteers, called “ambassadors.” 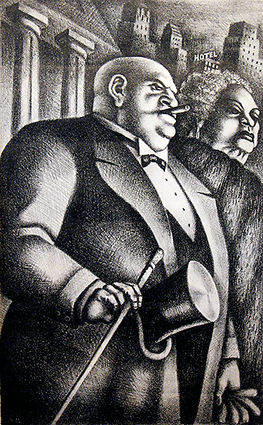 Said Martin: “This museum fills a niche in Puget Sound. It didn’t come out of nowhere. Lindsay has been collecting for years, board members are collectors, and I’ve been collecting and writing books for 25 years. For me, it gives me a chance to present artists to the world that no one knows about. These artists were innovators.”