35th Ave SE: Stuck between a beaver dam and a hard surface 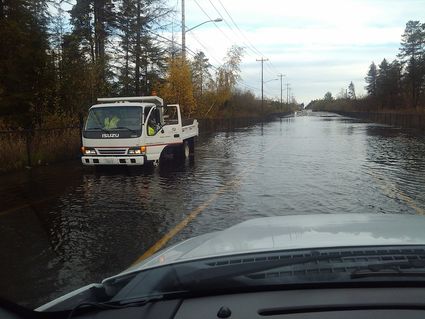 Mill Creek area residents know well the headaches of trying to use 35th Avenue when the rains come.

With beavers on private property on one side of the road and anticipation of improvements to Seattle Hill Road on the other, city officials in Mill Creek have watched helplessly as heavy rains continue to cause flooding over 35th Avenue SE.

Water flooding the roadway over the Thanksgiving weekend was just the latest episode of the traffic quagmire the city inherited when it annexed the area in 2005. The stretch of the heavily-traveled arterial was the main topic of conversation during a public hearing on the proposed 2017-18 city budget at the City Council meeting on Dec. 6.

The latest round of debate over the wet roadway was prompted by a single motorist who lost control of their car and hydroplaned into the wetlands. Police Chief Greg Elwin said there were no injuries from the latest incident blamed on the standing water, but said the wet roadway is a traffic hazard.

The state included $4 million in its latest budget to cover its share of the cost to elevate the three-lane arterial. Representatives of homeowner associations impacted by the road closures dominated the public hearing with pleas to the council to move ahead with repair work. The total cost of the repairs is projected to be between $5.5 and $6 million, according to Scott Smith, director of Public Works.

The settling began more than a decade ago when Snohomish County reportedly used lightweight fill on top of a large peat moss deposit when it widened the road in 2003. Portions of the road have settled more than 2 inches in the past three years, and 2 feet over the past 10 years, based on monitoring done by the city.

The challenge is timing the repairs to reduce the impact on the 15,000 motorists and the communities that depend on 35th Avenue between 141st Street SE and 144th Street SE as a main thoroughfare. Smith said improvements to Seattle Hill Road that runs adjacent to 35th Avenue could force even more traffic onto the city street.

Smith indicated the city needs to know details about what the county plans to do on Seattle Hill Road so the city can match the elevation. He added it would be impractical to have both roads shut down to traffic at the same time.

The underlying cause of the flooding are beaver dams on Penny Creek. The beavers could be trapped and relocated within the guidelines of the state Department of Fish and Wildlife, Smith said. But the semiaquatic rodents have complicated the issue by making their homes on a checkerboard of public and private land.

Homeowner Ryan Alexander presented the council with a petition to request that motorists not be detoured around the flooded area and not be directed through his residential neighborhood.

Mayor Pam Pruitt was emphatic about the need to expedite the repairs.

“This problem would have been solved years ago if any member of the City Council lived in one of the affected neighborhoods or had to drive on 35th Avenue everyday to and from work,” Pruitt told The Beacon.

The mayor said the new budget could allow the city to advertise for bids in early 2018, with construction starting that spring. Construction is expected to take up to eight months.