Schack to exhibit paintings of Tuskegee Airmen by Chris Hopkins 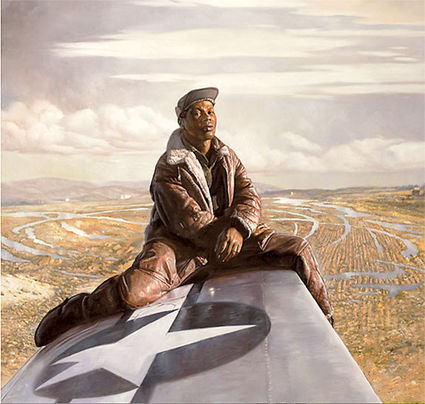 The exhibit includes 53 paintings and sketches by Everett artist Chris Hopkins that vividly illustrate feats of heroism by this courageous group of aviators during World War II.

Hopkins is best known for his work as a commercial illustrator in the entertainment industry. He has produced iconic posters for movies including, "Indiana Jones and the Temple of Doom" and posters for Super Bowls XX, XXI, XXII.

After moving to the Northwest in the late 1980s, he shifted his focus to historical events and celebrating compelling stories of American perseverance, including portraits of Northwest Native American artists, military service members, and Japanese Americans who were incarcerated during WWII.

He also is well known in Mukilteo where his work includes a painting of the late Father Bill, much loved by his parishioners at St. John Mission, and the powerful storm that shut down Ivars on Mukilteo’s waterfront, now on display at the restaurant.

In 2006, after meeting surviving members of the 99th Squadron, Hopkins began creating the Tuskegee Airmen series as part of his work for the Northwest chapter of the Air Force Art project.

"I was personally struck by the pride and dignity each of these gentlemen had in their country and how they had fought for it in WWII,” Hopkins said.

“Although today there has been more attention given to these men of valor, I feel that there is a larger story yet to be told, including not only the pilots, but the men and women behind the scenes who go largely unnoticed."

With the help of surviving Tuskegee Airmen, Pentagon personnel, and noted historians, he has created a body of work with tremendous attention to detail and accuracy.

To learn more about Chris Hopkins and his Tuskegee Airmen series, visit his website chrishopkinsart.com.