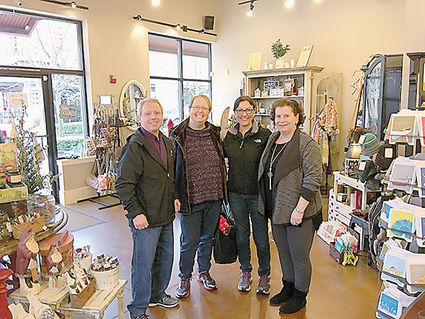 There are plenty of restaurants, and lots of professional services, but comparatively few retail shops on Main Street anymore.

“It would be great if we had more,” Matar said. “More people would see that this is a great place to shop.”

Help, public officials say, is on the way.

On Small Business Saturday  held this year on Nov. 26  some of that help dropped in at Kate’s Gifts and some of the other retailers in the form of elected officials to offer their support.

“Growing up, my parents owned a toy store, so I know how important holiday shopping can be for a small retailer. Small Business Saturday is a great opportunity to show our support for local shops,” said DelBene.

“By focusing on efforts that help our small businesses and local industries succeed, we’ll be able to create and grow more good-paying jobs for years to come right here in Washington.”

Plenty of consumers heeded the call this year. A record 112 million shoppers across the country reportedly showed their support by shopping at stores in their own community.

The idea was hatched in 2010 by American Express to remind holiday shoppers that small businesses remain the backbone of the U.S. economy.

According to DelBene spokeswoman Ramsey Cox, the most recent data from the Small Business Administration shows that Washington’s small businesses make up 98 percent of all employers in the state  more than half of the state’s private-sector workforce.

That explains why public officials want small business owners like Matar and Shane Somerville of Paddywack  another Town Center retailer  to succeed.

“We actually sell a lot of products made by small businesses  a number of our lines are handmade, and we especially love working with other businesses headquartered in Washington state,” Somerville, co-owner of Paddywack, told DelBene on Saturday.

“By supporting a small business like ours, customers are helping to support not only us, but many other small, independent businesses as well.”

DelBene said government can help by making bureaucratic hurdles small and simple, such as streamlining the tax codes and by passing legislation that will reduce disadvantages local retailers face against internet shopping.

As an example, the Congresswoman mentioned thr Remote Transactions Parity Act, introduced in Congress but not yet passed, which is meant to simplify and streamline tax collection and level the playing field between brick-and-mortar shops and online vendors.

“It would help small businesses that are at a competitive disadvantage,” DelBene said.

Closer to home, County Councilmember Ryan said another key to success is to create an environment where local businesses can prosper through zoning and other land use regulations.

Among the efforts is a proposal to build an indoor sports complex next to the Gateway Shopping Center that could draw thousands of visitors to town annually for athletic events. Plans for the complex include two soccer fields, warm-up fields, bowling lanes, laser tag, party rooms and more.

Pruitt estimated the complex could attract up to a million visitors every year. She said the city also is in discussions to bring a hotel to Mill Creek.

If those kinds of efforts come to fruition, they’ll bring people to town who will spend in restaurants and, yes, shops like Kate’s Gifts and Paddywack.

“By being business friendly, we can help our businesses here and bring in new ones,” Pruitt said. “And in exchange for them doing well, the city does well.”