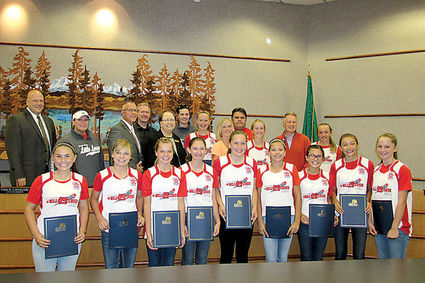 At the Sept. 27 City Council meeting, Mayor Pam Pruitt, on behalf of the City Council, recognized the team players and coaches of the 2016 Mill Creek Little League U12 Softball Team.

The team made the most of five hits in a 3-2 victory over Granite Falls to advance to the State Tournament. By overcoming a three-run deficit over Woodinville, the team remained undefeated and became the State Champions, earning them a trip to San Bernardino, Calif., to participate in the Little League Softball West Region Tournament, playing teams from Arizona, Wyoming, Nevada and Hawaii.

The City Council recognized the players and their coaches for displaying talent, sportsmanship, hard work and dedication to their team. Players and coaches recognized during the proclamation ceremony were: